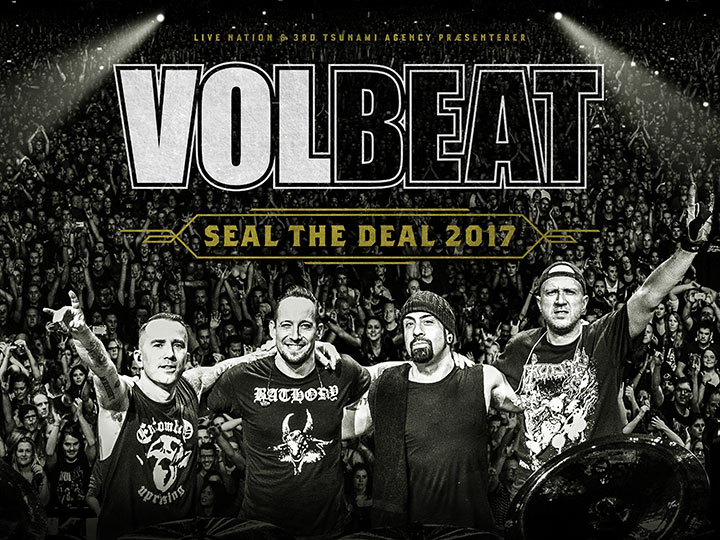 Volbeat has announced the support artists hand selected by the band as special guests on their European tour planned for late-summer in to early-fall.  In Denmark, Germany, Holland and Austria, Flogging Molly have been locked as direct support.  With the exception of shows scheduled for August 23 (Hamburg), 24 (Berlin) and September 03 (Scweinfurt) where the bills are still being finalized.  For the events planned in Sweden and Norway, Breaking Benjamin will appear.  Special guest Amorphis will be on the entire run as opener.

Founded in Los Angeles in 1997, Flogging Molly has always defied categorization. The infectious originality of their songs is a badge of honor and key to the band's creativity, their urgency. They infuse punk rock with Celtic instruments—violin, mandolin and the accordion—and they merge blues progressions with grinding guitars and traditional Irish music, the music of King's youth. "We're not a traditional band," explains Dublin-born King. "We are influenced by traditional music and inspired by it, but without question we put our own twist on it." Theirs is music of exile and rebellion, of struggle and history and protest. It's music of a country torn down the middle, a deeply beautiful and wounded country that knows no quit, and Flogging Molly pays homage to that resolve in every note.  For more information: http://floggingmolly.com/.

Over nearly the past two decades, Germany’s Beatsteaks have established themselves as one of the country’s most consistent, thoroughly exhilarating acts. In the wake of six great albums, blending juvenile, punk effervescence with crafty, infectious rock songwriting, the five Berliners dominated German subculture early on and have been a steady fixture in the German charts, on the rise and trending up, ever since releasing their fourth album “Smacksmash” back in 2004. Their previous 2011 longplayer “Boombox” entered the charts at number one, while their current, seventh album, simply entitled “Beatsteaks”, topped the charts in its first week. Over the years, they’ve developed a highly distinguishable sound, uncompromising in nature, yet able to reveal each and every song’s pure intensity.  For more information: http://beatsteaks.com/en/category/news/

As has been the case historically with artists like Teenage Bottle Rocket or Entombed, singer Michael Poulsen frequently extends the invitation to share the stage with to those he holds a deep respect for, alongside those that have had a direct influence on him.  In this instance, he has followed Amorphis since the Early 90’s and continues to hold the band in high regard.  For more information on Amorphis: http://www.amorphis.net/.

Poulsen offers, “Volbeat is honored to have these artists out with us later this year, and I think the fans will enjoy each of them.  They remain relevant today in continuing to release fresh music exhibiting their individual sounds and styles continuing to evolve.”

On August 30 in Thun, Switzerland, Beatsteaks will make a special appearance for this one-day event with Volbeat, Flogging Molly and Amorphis. Tickets for all appearances can be purchased here: http://www.volbeat.dk/en/dates/